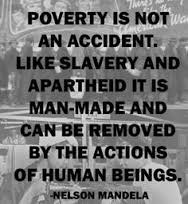 “Poverty is not an accident. Like slavery and apartheid it is man-made and can be removed by the actions of human beings” – Nelson Mandela

I found myself thinking of this quote today as I agree with Nelson Mandela’s words.

Poverty is unnatural and inhumane.

There is nothing accidental or acceptable about the fact that parts of our world live on $1.25 a day or less ($1.25 a day World Bank definition of “absolute poverty”).

And so many leaders past and present have pointed this out to us, yet we still struggle as a society to break down basic assumptions about class…

These assumptions about a “culture of poverty” are tied closely to race as they are based on the same logic used to justify enslavement, genocide, and brutality of people of color past and present who were/are considered “other”. “Other” being labeled as “stupid” “emotional” “lazy” “ugly” “violent” ect.

If we do not start to understand the thoughts and attitudes at the basis of such assumptions we will be forever stuck.

I believe the solution is in Nelson Mandela’s words. Poverty “can be removed by the actions of human beings”. Even as every day we can see signs of the violence of poverty, we can also find signs of resistance when we look for them.